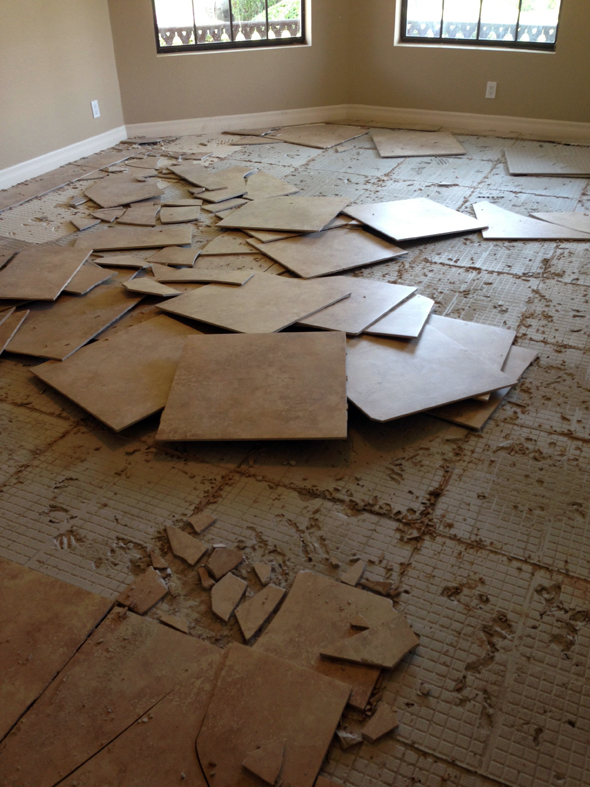 Updates on the Demo!

Sorry for the delay on the laundry room reveal guys! We’re having some technical difficulties, but the post should be up tomorrow morning! In the meantime, I thought I’d share a little update on where we are with the demo. Part of me feels like things are getting done fast, but the other part of…

Sorry for the delay on the laundry room reveal guys! We’re having some technical difficulties, but the post should be up tomorrow morning!

In the meantime, I thought I’d share a little update on where we are with the demo. Part of me feels like things are getting done fast, but the other part of me is dying inside from impatience. Not to sound ungrateful but we’ve been living out of suitcases and sleeping on air mattresses for weeks now since our stuff isn’t here yet. I’m a little over it. The idea was to get the floors done before the moving truck arrived at the end of the month, so we’ve been hurrying as fast as possible to get the demo done. The turnaround was going to be tight even if everything went perfectly perfect (which, duh, it never does).

The floor tiles came up pretty easy and many of them were salvageable. The thinset was more like thick-set (almost a full inch in some places!) and that made for a major dust situation to get down to concrete.

The wood upstairs was nailed down to the plywood subfloor, so it came up in big salvageable planks. So that was good news. The wood in the living room and in the master bedroom however was laid on the concrete slab. It had to be glued down and it was a royal nightmare to pull up. The stuff just shredded when we took a crow bar to it!

(More after the jump)…

We ended up having to score the floors with a circular saw and then soak them (literally) with water from the garden hose to loosen the wood and the glue underneath. Thank goodness we only had two rooms of that glue down stuff, but just those two rooms have taken days and days of work.

This is where we are today. Just the bits of glue left!

There’s been some drama with the wood I wanted too, so the materials haven’t even been ordered yet. :/ This is the part of the reno process where the owner (bummer that it’s me this time) starts banging their head on the (dusty) walls, tears streaming down their face and dolla dolla bills flying out of their pockets at the speed of light.

But we’ll get there! I think we’ve figured out an alternative option for our wood floors that is more affordable and easier to install (I’ll share more next week). There is a bit of a light at the end of this tunnel!

The other aspects of the demo are going a little better than the floors. The walls came down fast, which was completely exciting and satisfying! :) The hearth was ripped up in about twenty minutes!

I had a mason come out today and now it’s looking like we’re only going to redo the fireplace in the living room. We have to have a fireplace specialist build an entirely new firebox because of the way the flu (or the lack there of – it’s sort of just a pipe?) was built. While it’s not cheap to have this work done, it’s not as expensive as I was worried it would be, so I’m happy to invest a little to make this fireplace special since it’s in the family room. I think we’ll save the cash on the master fireplace though and just paint the stone or something else DIY.

In the front part of the house, we ended up taking off the pony walls and the columns completely to make the bookshelf built-ins easier down the road. I’m loving how open the room feels now! We’re building back some of the walls, but I think it will still feel very open. Can’t wait.

I was hoping to put in a new front door in a couple of months (once the bank account had a minute or two to recover!), but because of the new floors we’re having to change the threshold and it just makes sense to do this now. I think I found one that I like that’s affordable, but it needs a little DIY magic to make it special. Post coming there, of course.

The entry way opposite the front door is getting raised now too. Both the front door and the entry way were only 80″ tall and both will be about 100″ now without trim, which will better match the proportions of the high ceilings in the rest of the house I think. The short doors felt weird in person, so in a way I’m glad we were forced to take these projects on now rather than later.

The rest of the house has been getting only minor updates so far. I started a few little projects in the mudroom and I took down the plastic plants in the kitchen. :)

I’m totally dying to paint in here (well, everywhere actually), but we need to wait until the demo dust settles a little more. I think this weekend might be a good time to throw up some sample swatches. Pretty sure about 50% of my anxiety will be gone once that yellow faux plaster paint job is gone!  ;) …also that ceiling fan…

35 thoughts on “Updates on the Demo!”