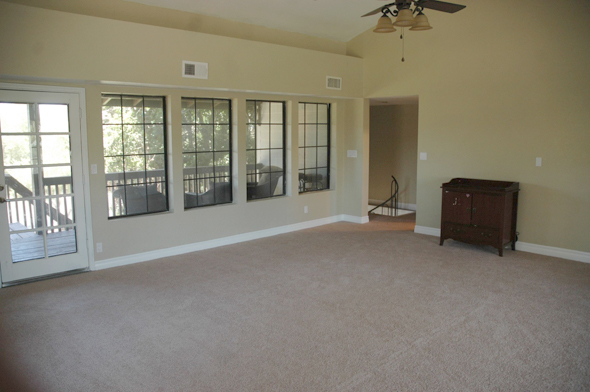 Yesterday we started the reno work on the house! Yay, progress! We tore into the drywall and pulled up baseboards. Today the flooring guys are coming over to work on getting up the old tile and engineered wood. I’m excited to share the progress photos once I have a minute to catch my breath. In…

Yesterday we started the reno work on the house! Yay, progress! We tore into the drywall and pulled up baseboards. Today the flooring guys are coming over to work on getting up the old tile and engineered wood. I’m excited to share the progress photos once I have a minute to catch my breath. In the meantime, I’m hoping we have a productive couple of days before the holiday weekend. We really need to get these floors finished before the moving truck arrives in a couple weeks and there’s so, so much to do.

Early this morning the doors going into the kitchen from the music room and the family room were closed off with plastic sheeting to help manage the dust and to keep Linus and the girls out while the work on the floors is getting done. We’ll probably take them up to my parents house for a big chunk of the time to keep them safe and out of the way. Plus, my parents’ town is always about twenty or thirty degrees cooler than Phoenix, so it will be nice to escape the heatwave here.

(More after the jump)…
While the floors are getting done (and while we’re waiting for all our stuff to arrive on the moving truck), we’re living in mostly the guest room/play room area of the house. We can also use the kitchen/pantry/mudroom, but pretty soon the dining area of the kitchen will be overrun with boxes of wood that need to acclimate and sit in the air conditioned house for about a week before they can be laid down. So mostly, we’re going to be hanging out in the play room when we’re home.

It’s a pretty big room and I think the plan after moving in is to leave it mostly open, so the kids can really run around in the space. Last night we had a cartwheel competition with cousins in here, and pretty much my life was complete. :) We’re thinking of putting the smaller of our two tv’s in this room. The girls haven’t been interested in movies or shows this week (which is also usually the case when we visit – so much space to run around! so many people to play with!), but it is nice to turn on a movie and let the kids chill out while I’m making dinner.

I’m not a big fan of the carpet choice on this side of the house. It looks a little pink here, and while it’s not that bad in real life, I’d love to find another wall to wall to replace this shag eventually. I’ve thought about doing the wood in here too, probably when we do the big kitchen/pantry/mud room reno, but I’m not sold on the idea. The soft, thick carpet is so nice for little knees, I feel like it wouldn’t be the same for the kids with rugs on wood floors.

I’ve been thinking it would be so fun to install a hanging chair from the center beam, but it might be just asking for trouble.

The two closets flanking the bay window have shelves for toy storage. The previous owner, who is a sports marketer (can you tell from the jerseys?), had only one daughter. Both of them were so sweet. The daughter is almost nine now and decided to leave a lot of her toys for my girls. We don’t have much of anything for the next few weeks other than suitcases with clothes, so it’s been nice to have a few toys (and even some bikes!) around the house.

On the back wall of the room is a smallish porch that connects the play room/guest area of the house with the backyard (there’s no interior hallway upstairs – the only other connection is the spiral staircase in the mudroom).

Like pretty much every part of the exterior, the playroom porch needs a power wash and a paint job in the worst way.

This shots shows where I want to do the kitchen bump out. We’ll have to take out that big ficus tree to do it, which the home inspector recommended we do anyway to prevent any root damage to the foundation of the house or the plumbing. When we close in that patio area below though, our contractor says it would be pretty easy to modify the porch and stairs area here to make a regular size stairway to the upstairs here. We’ve been dreaming of then turning the spiral stairs in the mud room into a slide. Wouldn’t that be crazy cool? That would be so far down the road, but it’s a fun part of my “in-my-dreams house to do’s” list :)

Here are the “more realistic to do’s” for the play room:

– Paint the walls a light but bright color
– Replace florescent lighting
– Replace the old ceiling fan
– Eventually replace the carpet with something less taupe and shaggy, but equally kid-friendly
– Daybed in the bay windows for now, eventually built-in window seats with storage
– Sofa and a pair of chairs floating
– Hanging chairs?
– Small TV and console on east wall (the wall without the windows)
– Curtains and shades for privacy/sun protection
– Bright, fun art (maybe also a gallery wall of my kid’s art?)